The world is filled with exhilarating and exciting experiences and such less time. The rising prices of tourism and fees just takes a lot. It feels relieving to know that there are still experiences that are light on our pockets and life defining. So here are 20 most amazing once in a lifetime experiences you can enjoy on a tight budget.

Most Amazing Once in a Lifetime Experiences 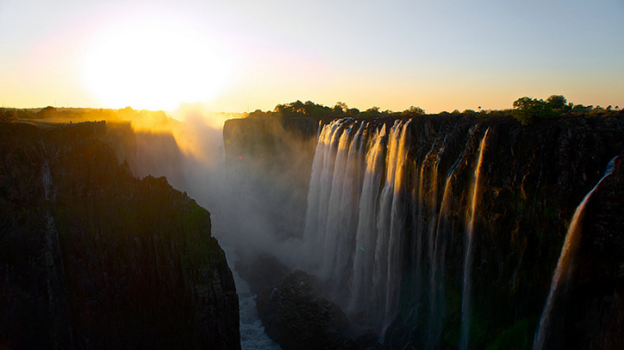 Imagine falling over the world’s largest and most beautiful waterfall. Ain’t that amazing! The Skydive Tandem Co. (STC) is here to fulfill that dream. Based just 7 kilometers from the falls, small planes lift adrenaline seekers to 10,000 meters above the ground. Before the fall, the plane takes you for a site seeing over the Rainbow Falls, Main Falls, Devil’s Cataract and Horseshoe Falls.

On Vaadhoo Island, one of the islands in the Raa Atoll in the Maldives, a strange and astonishing phenomenon takes place. As the waves crash on the beach, the water glows blue in the dark, acting as a mirror, reflecting the sparkle of stars. This is caused by a natural chemical reaction known as bioluminescence where microorganisms in water are disturbed by oxygen. It is one of the sweeter treats of nature which can still be cherished without any cost.

The carnival in Rio de Janeiro 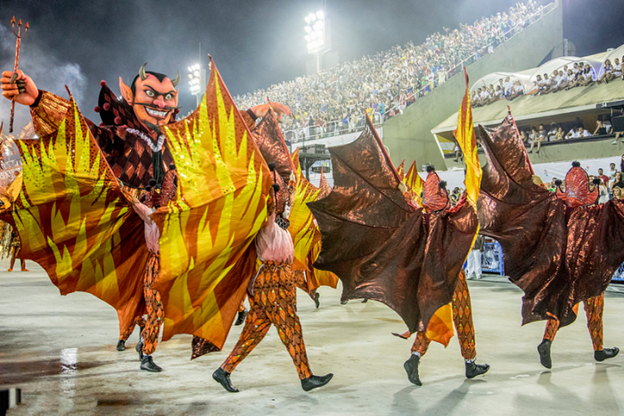 Rio de Janeiro’s carnival is not only the biggest carnival in the world, but also a reference against which all others carnivals are compared. It is one of the most artistic and vibrant events on the planet. The origin of the carnival dates back to the ancient Rome and Greece, when people celebrated in honour of the gods and to respect the great waters. It is a fiesta of food, parades and dance. 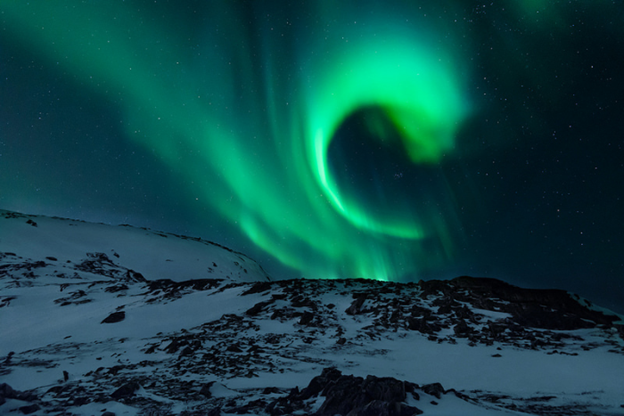 Commonly known as the Northern Lights, Aurora Borealis is a mesmerizing and tranquilizing light show that has fascinated humankind for millenniums. The effect is caused by the interaction of charged particles from the sun with atoms in the upper hemisphere. This phenomenon is only visible in the dark and scientist still can’t figure out when they will appear. So, you better pray before leaving. Few of the best places to see the lights are Finland, Sweden, Norway, Iceland, Greenland, Canada and Alaska. 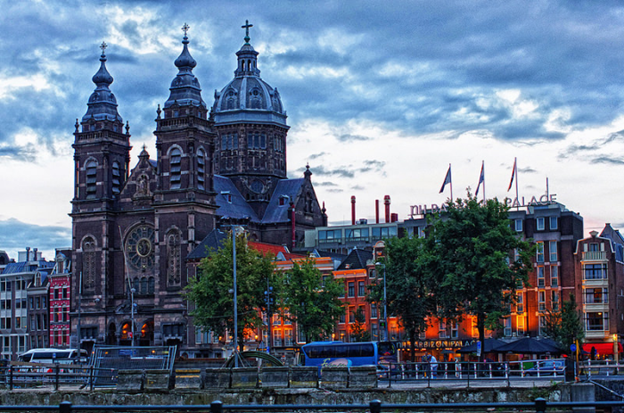 Amsterdam is just a haven with diversity and friendly tourism. With liberal alcohol and soft drug rules, you can really enjoy the “Greenery” and urban beauty of European architecture. It is one of the safest cities in Europe and a perfect romantic avenue. The city can be a little expensive, but renting a cycle and living in a hostel can really scrunch your bills. 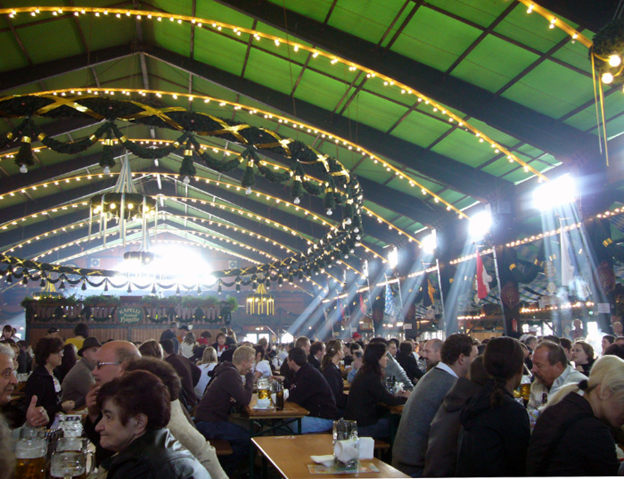 The Oktoberfest, annually celebrated in Munich, is the world’s largest folk festival. The festival spans over two weeks and revolves around drinking beer, dancing and colourful parades. The location is divided into 14 big tents and 20 small ones, with a capacity of accommodating upto 10,000 people. These tents are divided on the basis of breweries and cumulatively they sell a wide range of delicious beer which would make any beer lover happy. So drink to your heart’s content and let the Germans show you how to party. Resembling a large glass mirror, Salar de Uyuni is the world’s largest salt flat, left behind by prehistoric lakes evaporated long ago. Stretching to about 10,000 sq. kms., the land resides a thick crust of salt extended to the horizon. Sometimes, the nearby lakes overflow and transfer a thin layer of water on these salt flat, transforming it into a gigantic mirror reflecting the sky. It is also said to be the place where sky touches the ground. 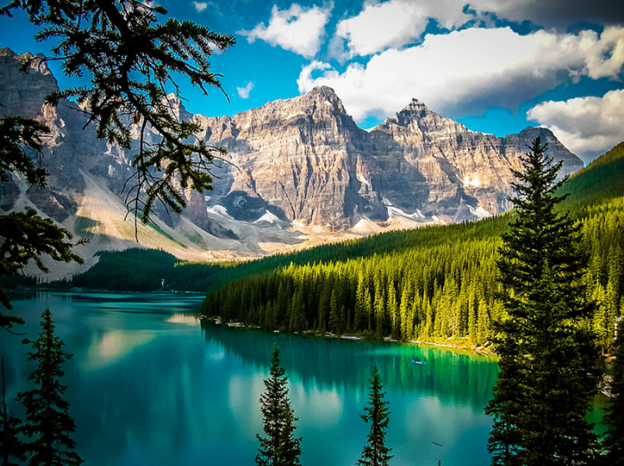 A lake of serenity and tranquility encompassed by majestic mountain peaks. The lake is situated in the beautiful Valley of the Ten Peaks in Banff National Park, Alberta, Canada. The scenery this location provides is one of the most comforting views the nature has to offer. The road leading to lake is closed during the winters. Hence, June to August is probably the best time to visit when the lake has thawed and back to its turquoise blue colour. You can also rent a canoe and row through the lake. 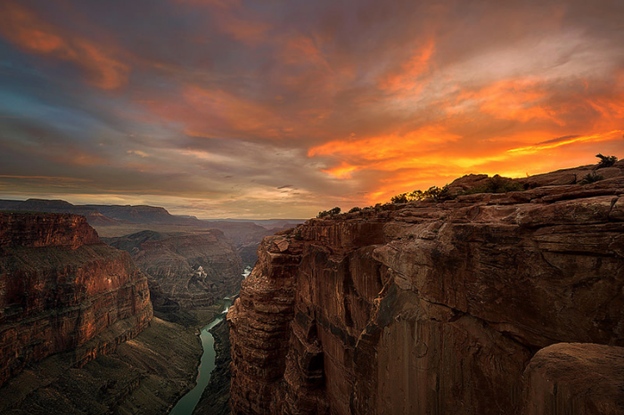 The sunsets and sunrises over Grand Canyon are just breathtaking and overwhelming. The horizontal light falling on the peaks of gigantic rocks exhibits the sheer vastness of the valley. Especially during sunsets. At the golden hour of the sunset, the canyon shines brightest and shows its vivid colours. The longer you stand over there, the more colour transformations of the sky you will see. From golden to pink to purple

Trek to Everest Base Camp

For those seeking thrill and the breath-taking beauty of nature, this trek is what you are looking for. A test of one’s endurance and determination usher you to challenging hikes, from Nangkartshang Peak (16,672 fts) to Kala Patar (18,192 fts) and to the Everest Base Camp (17,590 fts). The trek takes you through the Sherpa villages and the ancient Thami and Tengboche monasteries. 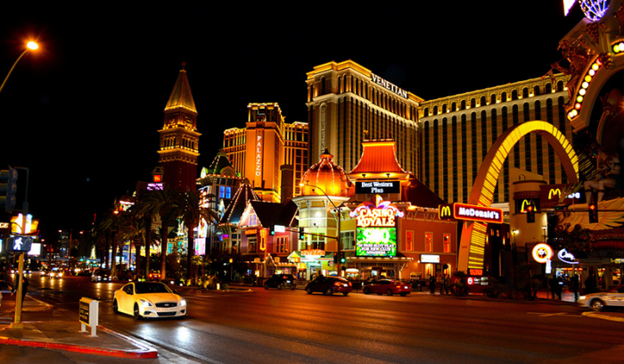 This Gambling Capital of USA has a lot to offer to its guests. Rather than worrying about spending, you can earn some for yourself. Gamble in some of the most amazing casinos in the world. Las Vegas also has sensational bars, pubs and restaurants where you can party all night long and have the time of your life. 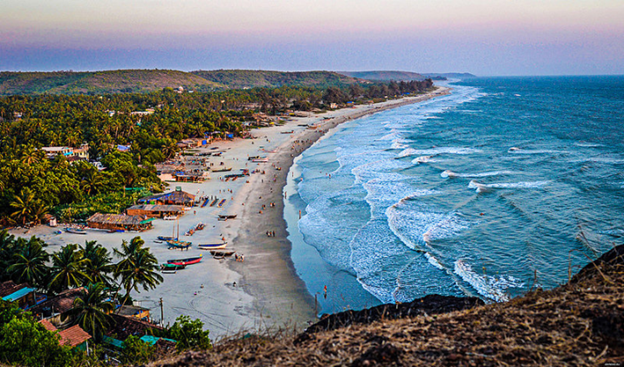 India, in itself, is one of the best countries to travel cheap and explore the diversity of humankind, Goa is the quintessential party hub of India. With rave parties and electrifying music playing dominating its nights, the state is filled with breathtaking scenic beauties. It has some of the best beaches in India. The relaxed atmosphere surrounding Goa has turned it into a hippie haven. 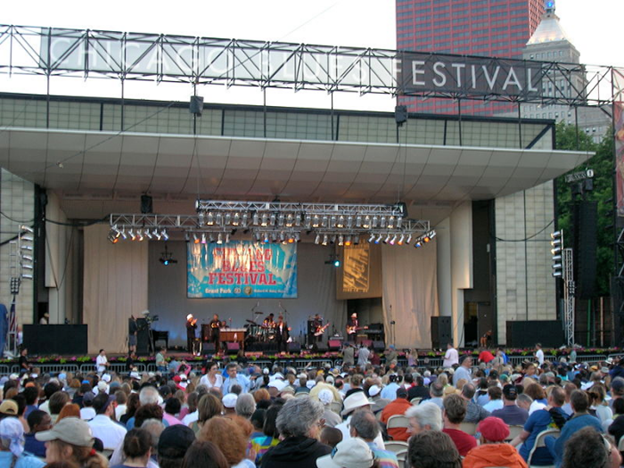 Since 1984, the year after the death of the “Father of modern Chicago Blues” Muddy Waters, the Department of Cultural Affairs in Chicago has been throwing the Chicago Blues Festival to celebrate the genre. The festival has featured some of the biggest pioneers of the genre like B.B.King, Etta James, Buddy Guy and many more. The festival celebrates the genre in an exhilarating manner that reminds us the roots of modern music. And yeah, the concert is free. 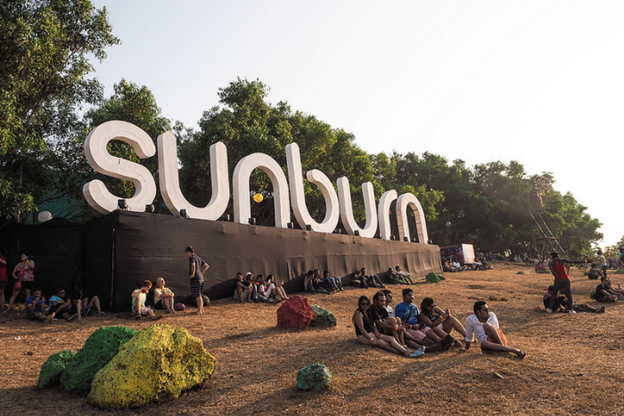 Sunburn is a commercial EDM Festival held in India. Begun in 2007, has become a significant contributor to the EDM music in India. Recognized as the Asia’s largest music festival, the festival has amazing light and sound quality with powerful performances and electrifying music. The festival has hosted some of the iconic artists like David Guetta, Kygo, Martin Garrix. The festival also features artists from its homeland like Nucleya, Shaan, Mojojojo. 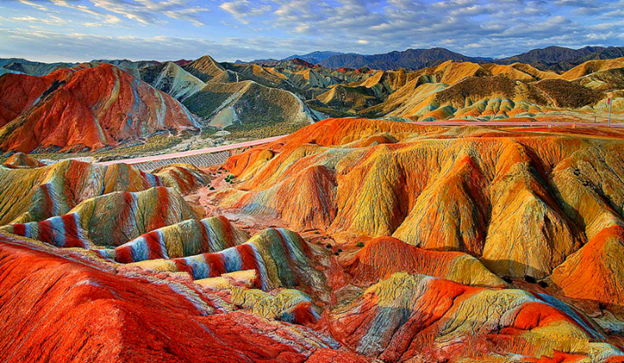 This geological wonder is constructed by different coloured sandstones and minerals pressing together for 24 million years and then buckled by tectonic plates. The mountains are part of the Zhangya Danxia Landform Geological Park and are totally sublime to look upon. The artistic beauty that the mountains provide an experience that you can’t witness anywhere else. The mingling colours are sure to make your evening colourful. 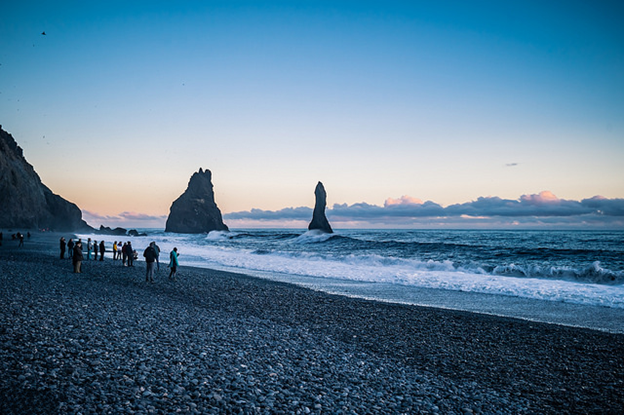 The Black Sand Beach of Reynisfjara are one of the most unique beaches in the world. It is the most beautiful volcanic beach Iceland has to offer. The beach was created by the lava flowing into the ocean which cooled instantaneously as it touches the water and then pushed to the edges of the land. The multiple shades of cloudy sky just amplify the serene vibe of the beach. 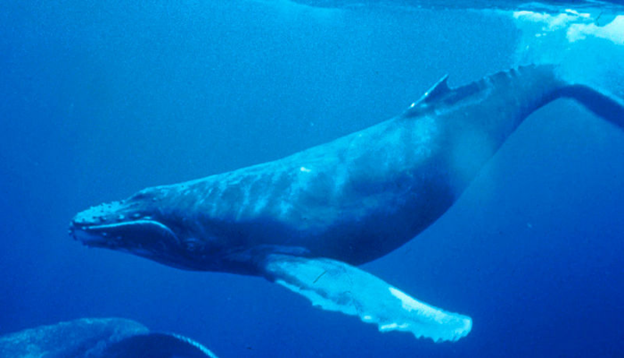 Imagine swimming with the largest animal on the planet. Now that’s thrilling! The unique blue whale safari in Sri Lanka takes you to the depths of Indian Ocean with a small team of specialists who won’t only help you swim with them, but photograph them too. The majestic site under the vast ocean with the suns beam shinning the water. The beauty of it can only be understood if witnessed with one’s own eyes. 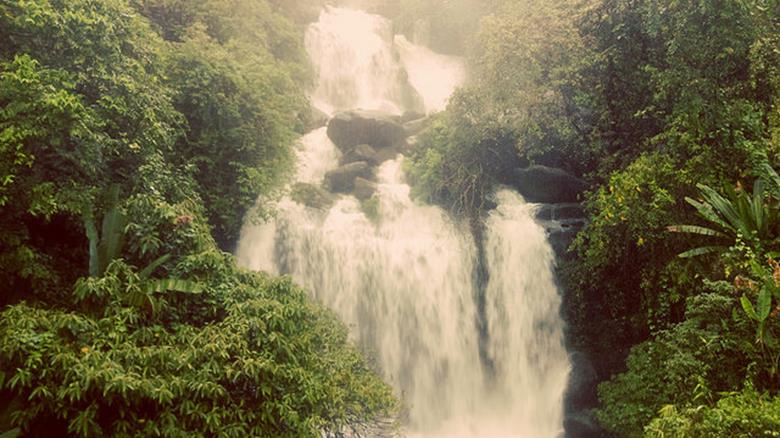 The ‘Seven Sisters’ comprise seven sister states of northeast India, namely Arunachal Pradesh, Assam, Manipur, Meghalaya, Mizoram, Nagaland, Tripura. The natural beauty in these humid sub-tropical lands is unfathomable. From densely covered forests to tranquilizing lakes and rivers, they have it all. The area also shares land with the Himalayan ranges. Cherrapunji located in Meghalaya is one of the rainiest places in the world with an annual precipitation of 11,777 meters. The greenery in these lands is mesmerizing.

La Tomatina is a food fight festival held on the last Wednesday of August each year in Bunol, Spain. The festival is deemed as the World’s Biggest Food Fight and receives a footfall of about 40,000 to 50,000 people. The festival entails people throwing tomatoes at each other, dancing and having fun. The fight goes on for an hour. Their cleaning process involves using fire trucks and shoot water down the streets, cleaning the streets and fighters too.

Hike up to Machu Picchu, Peru

High on the Andes Mountains sits this breathtaking Incan citadel which might be on every hikers list. The steep construction of the mountain makes it really challenging, but rewards you to an amazing panoramic view. Sun’s rays spread across the ancient site and the stone carved buildings with the beautiful background of distant snow-capped peaks of Salcantay.