In this blog I have listed down top historical places to visit in Rajasthan. Rajasthan has a very amazing history. Many rulers from different countries and continents have ruled India and for a very long time. Every corner of our country has its own history. Till the time our countrymen ruled India we were really rich in our culture. Then foreigners came and we started sharing our culture and to adopt theirs. There are many places in our country where many historical thing and decisions were made by our ancestors and rulers and where many historical fights took place. There are also some historical leftovers like monuments, temples, churches, mosques, parks pillars, etc, which gives us an idea and makes us aware about our rich culture and ancient lives of our countrymen who lived much -much earlier from our birth in the same piece of land on which we are residing now.

Famous historical places to visit in and near Rajasthan

Here are some famous places to visit near Rajasthan where one can go according to their personal choice and preference. 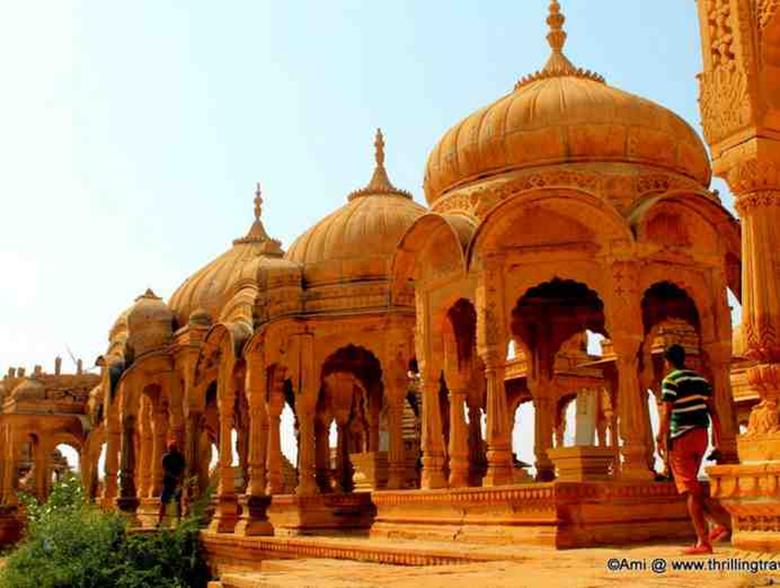 Bada Bagh, precisely called ‘Big Garden’ is located some 6kms off from the Jaisalmer city. First recognized by Maharawal Jai Singh in the 16th century and later operated by his son Lunakaran, Bada Bagh houses incredible cenotaphs (Chhatris) of Rajput kings of 6 centuries. Three spots, which are a dam, a garden and a tank, are the most prominent attractions of this historical site.

A descendant of Maharawal Jaisal Singh, the founder of the state and Maharaja of Jaisalmer State, Jai Singh II (1688–1743), commissioned a dam to create a water tank during his reign in the 16th century. This made the desert green in this area. 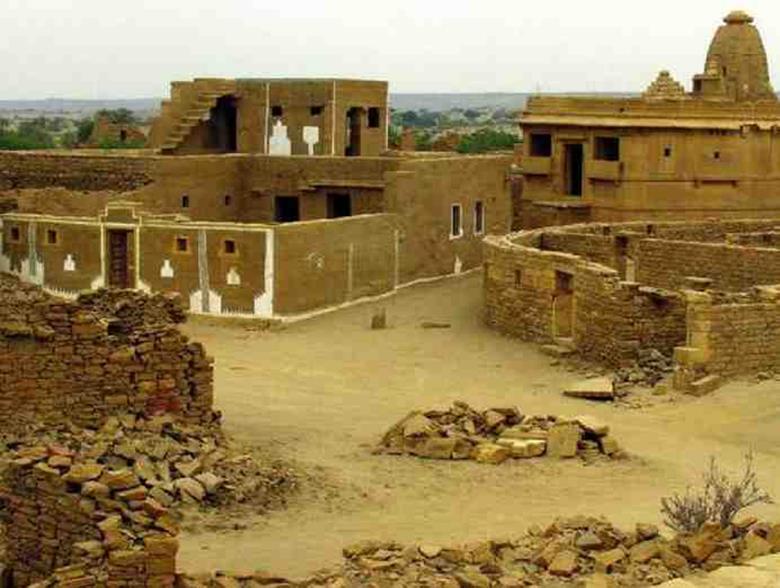 Amidst the deserts and sand dunes, Rajasthan houses a cursed heritage of Kuldhara village, which was cursed and abandoned by Paliwal Brahmins long ago. Though inhabited, the village appears to be a planned, well-settled place with temples, houses and streets of ancient architectural style. Locals tell that anyone who tries to stay in the village would suffer death.

It was abandoned by the early 19th century for unknown reasons, possibly because of dwindling water supply, or as a local legend claims, because of persecution by the Jaisalmer State’s minister Salim Singh. A 2017 study suggests that Kuldhara and other neighboring villages were abandoned because of an earthquake. Over years, Kuldhara acquired reputation as a haunted site, and the Government of Rajasthan decided to develop it as a tourist spot in the 2010s. 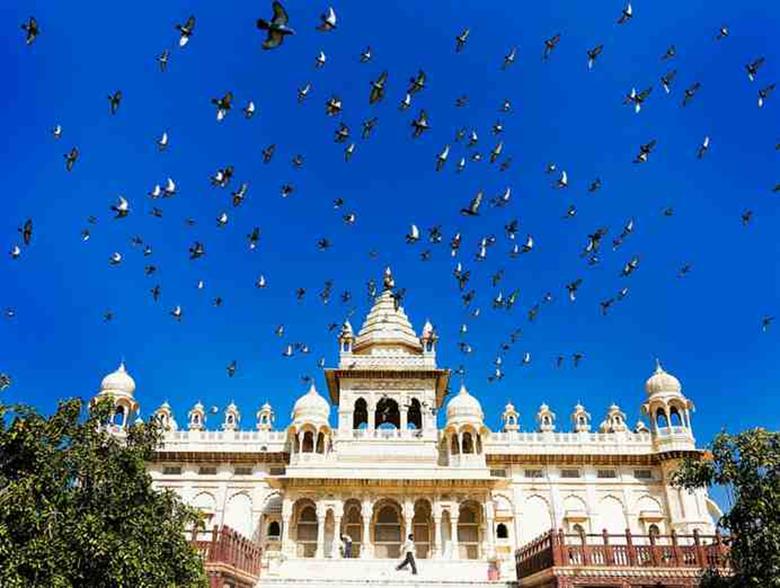 The Jaswant Thana is a cenotaph located in Jodhpur, in the Indian state of Rajasthan. It was built by Maharaja Sardar Singh of Jodhpur State in 1899 in memory of his father, Maharaja Jaswant Singh II, and serves as the cremation ground for the royal family of Marwar.

The mausoleum is built out of intricately carved sheets of marble. These sheets are extremely thin and polished so that they emit a warm glow when illuminated by the sun.

The cenotaph’s grounds feature carved gazebos, a tiered garden, and a small lake. There are three other cenotaphs in the grounds. The cenotaph of Maharaja Jaswant Singh displays portraits of the rulers and Maharajas of Jodhpur. 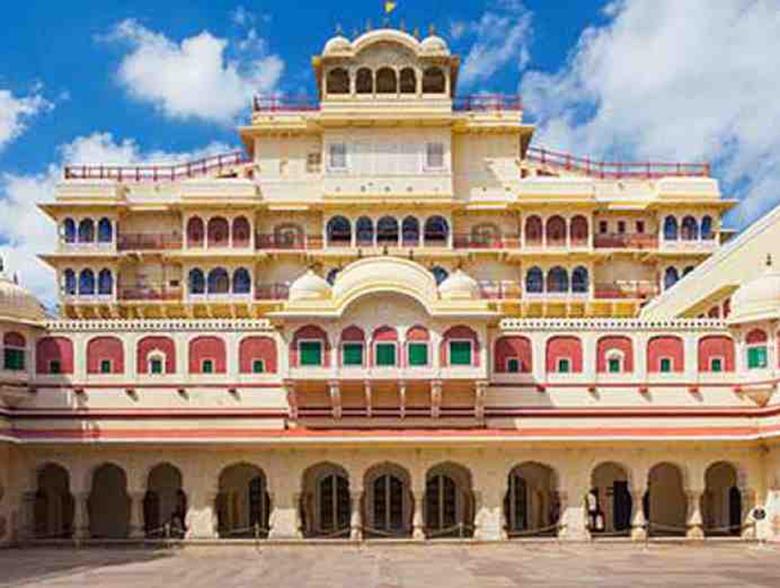 City Palace, jaipur which includes the Mubarak and Chandara palaces and other buildings, is a palace complex in Jaipur, the capital of the Rajasthan state, India. It was the seat of the Maharaja of Jaipur, the head of the Kachwaha Rajput clan. The Chandra Mahal palace now houses a museum, but the greatest part of it is still a royal residence. The palace complex, located northeast of the centre of the grid-patterned Jaipur city, incorporates an impressive and vast array of courtyards, gardens and buildings.

The palace was built between 1729 and 1732, initially by Sawai Jai Singh II, the ruler of Amber. He planned and built the outer walls, and later additions were made by successive rulers continuing up to the 20th century. The credit for the urban layout of the city and its structures is attributed to two architects namely, Vidyadhar Bhattacharya, the chief architect in the royal court and Sir Samuel Swinton Jacob, apart from the Sawai himself who was a keen architectural enthusiast. The architects achieved a fusion of the Shilpa Shastra of Indian architecture with Rajput, and Mughal. 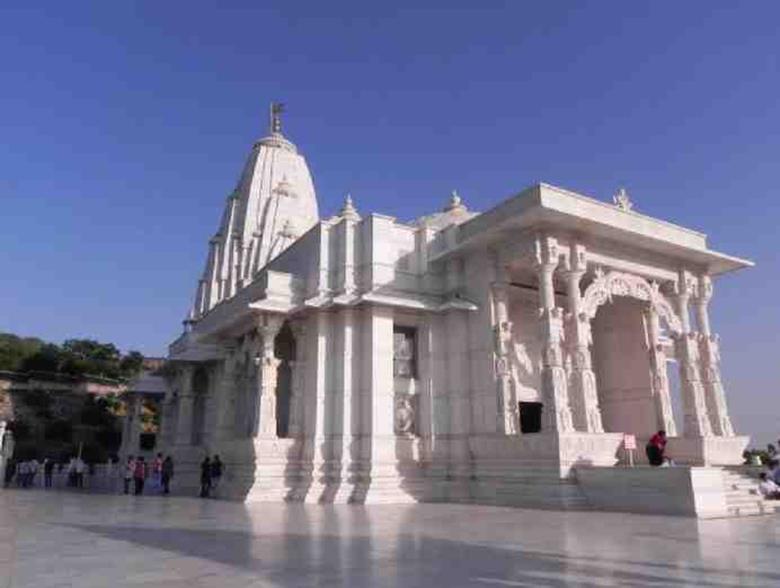 Birla Mandir, Jaipur is a Hindu temple located in Jaipur, India and is part of one of the several Birla Mandirs located all around the country. The grand temple is located on an elevated ground at the base of Moti Dungari hill in Rajasthan. The temple is sometimes also referred to as the Laxmi Narayan Temple.

The Temple is dedicated to Lord Vishnu (Narayan), the preserver and his consort Lakshmi, the Goddess of wealth. Due to this reason, Birla Temple is also known as Laxmi Narayan Temple. Birla Mandir is constructed in the finest quality of white marble. The three huge domes of the temple represent three different approaches to the religion. The beautiful white marble temple mesmerizes the onlookers, when it glows at night. Stained glass windows depict the scenes from Hindu scriptures. Ganesh the protector of households, is above the lintel, and the fine quality of marble is evident when you enter the temple and look back at the entrance way. 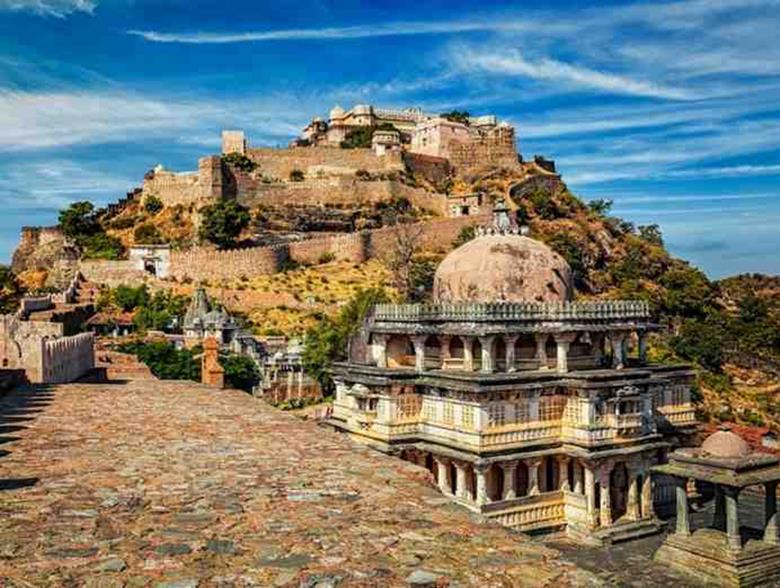 Kumbalghad is a Mewar fortress on the westerly range of Aravalli Hills, in the Rajsamand district near Udaipur of Rajasthan state in western India. It is a World Heritage Site included in Hill Forts of Rajasthan. Built during the course of the 15th century by Rana Kumbha, Kumbhalgarh is also the birthplace of Maharana Pratap, the great king and warrior of Mewar. Occupied until the late 19th century, the fort is now open to the public and is spectacularly lit for a few minutes each evening. Kumbalgarh is situated 82 km northwest of Udaipur by road. It is the most important fort in Mewar after Chittaurgarh.

With a wall over 38 km long, the fort is among the largest wall complex in the world, and the second largest fort in Rajasthan after Chittor Fort. 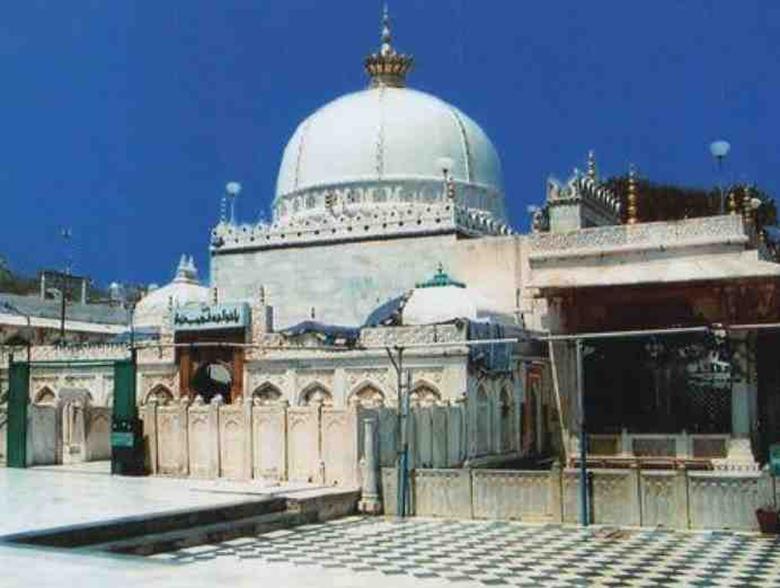 The dargah of Moinuddin Chishti , is an international waqf, an Islamic mortmain managed by the Dargah Khwaja Saheb Act, 1955 of the Government of India.

Ajmer Sharif Dargah is 2 kilometres away from the main central Ajmer Railway station and situated at the foot of the Taragarh hill, and consists of several white marble buildings arranged around two courtyards, including a massive gate donated by the Nizam of Hyderabad and the Akbari Mosque, built by the Mughal emperor Shah Jahan. It contains the domed tomb of the saint. Akbar and his queen used to come here by foot on pilgrimage from Agra every year in observance of a vow when he prayed for a son. 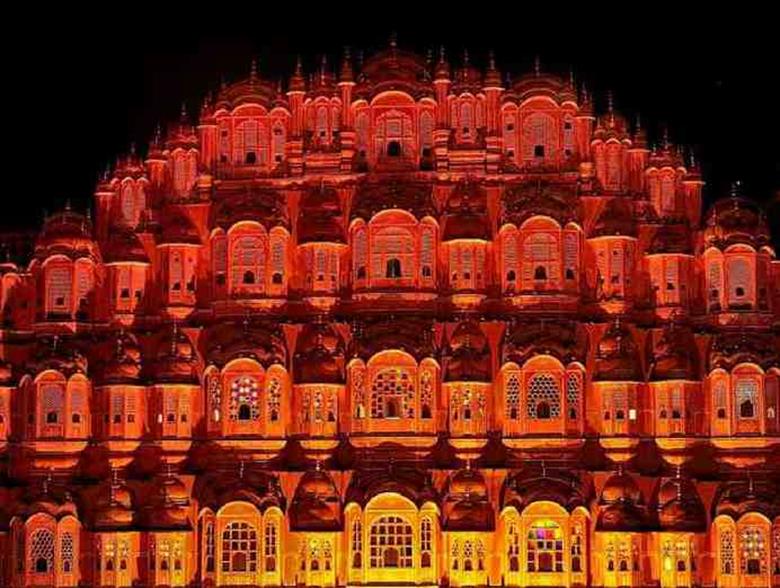 Hawa Mahal is a palace in Jaipur, India. It is constructed of red and pink sandstone. The palace sits on the edge of the City Palace, Jaipur, and extends to the zenana, or women’s chambers.

The structure was built in 1799 by Maharaja Sawai Pratap Singh. He was so inspired by the unique structure of Khetri Mahal that he built this grand and historical palace. It was designed by Lal Chand Ustad. Its unique five-storey exterior is akin to the honeycomb of a beehive with its 953 small windows called jharokhas decorated with intricate latticework. The original intent of the lattice design was to allow royal ladies to observe everyday life and festivals celebrated in the street below without being seen, since they had to obey the strict rules of “purdah”, which forbade them from appearing in public without face coverings. 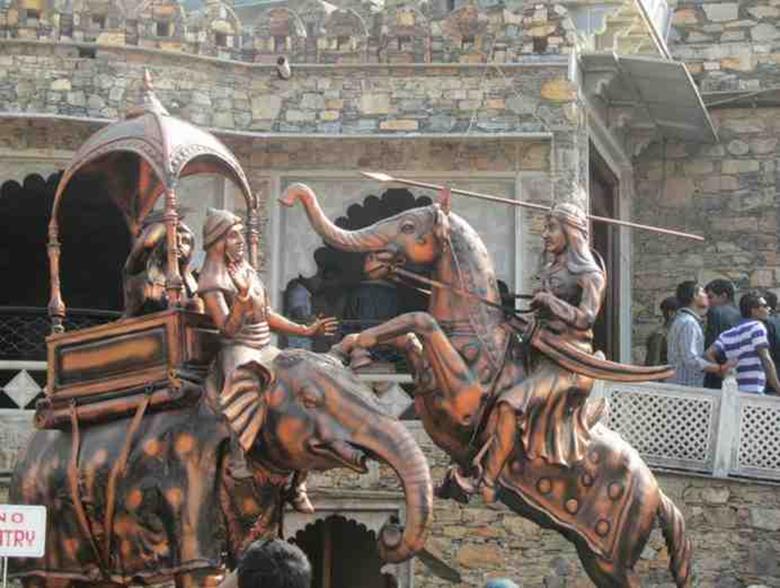 Haldi Ghati is a mountain pass in the Aravalli Range of Rajasthan in western India which connects Rajsamand and Pali districts. The pass is located at a distance of 40 kilometres from Udaipur. The name ‘Haldighati’ is believed to have originated from the turmeric-coloured yellow soil of the area.

The mountain pass is a significant historical location. It is the site of the Battle of Haldighati, which took place in 1576 between the Kingdom of Mewar and the Mughal Army led by king Mansingh. Maharana Pratap led the armed forces of Mewar against the Mughals who fought under the command of Mughal emperor Akbar’s general Man Singh I of Amer 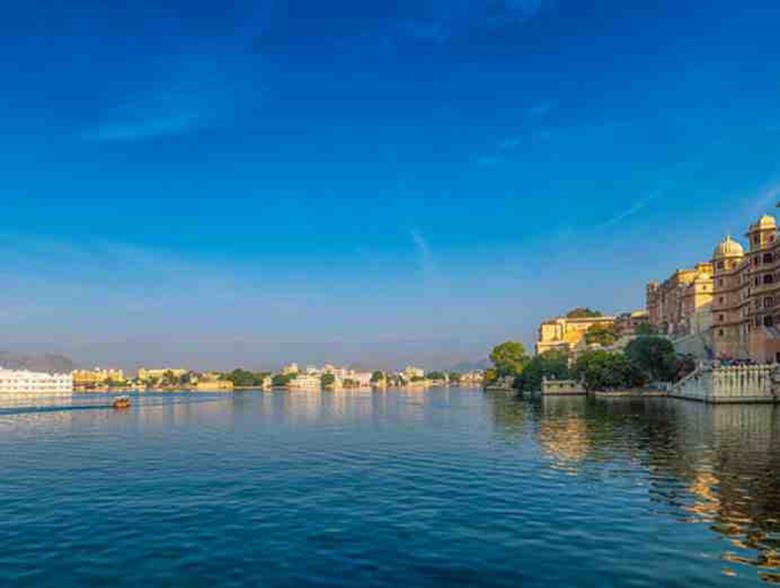 Lake Pichola, situated in Udaipur city in the Indian state of Rajasthan, is an artificial fresh water lake, created in the year 1362 AD, named after the nearby Picholi village. It is one of the several contiguous lakes, and developed over the last few centuries in and around the famous Udaipur city. The lakes around Udaipur were primarily created by building dams to meet the drinking water and irrigation needs of the city and its neighborhood. Two islands, Jag Niwas and Jag Mandir are located within Pichola Lake, and have been developed with several palaces to provide views of the lake.

Maharana Udai Singh, impressed by the charm of this lake with the backdrop of green hills, founded the city of Udaipur on the banks of the lake and also enlarged the Lake by constructing a stone masonry dam in the Badipol region on the shore of the Lake.

So the history lovers near and in Rajasthan you all can go out to a perfect place according to your choice. Suggest your friends and make plans. Go out for an amazing trip to these ancient and historical places to see the beauty of nature and history of the place. Don’t forget to take pictures of these places. Go for a vacation here and add on to your memories.