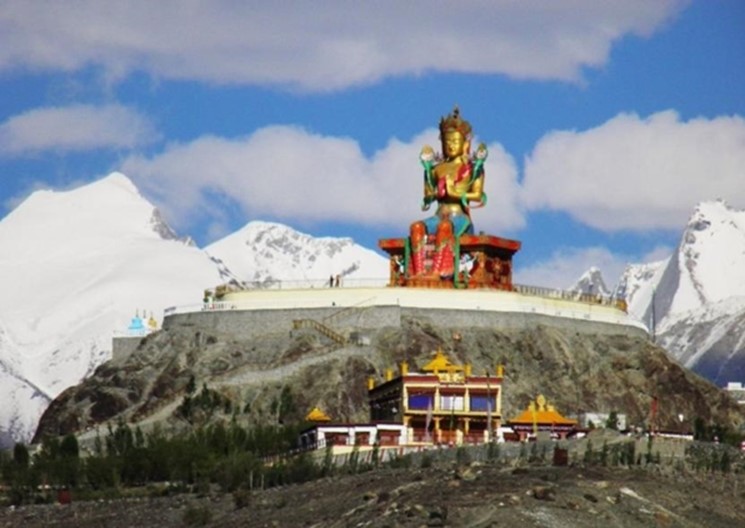 Monasteries in Ladakh attract tourists from all over the world and is well known for its richness in history and culture. These monasteries sings about the greatness of Buddhist’s culture. Apart from seeing it as a religious site, it can be a great place for lovers of art because these monasteries contain silver and gold statues of Buddha, beautiful paintings, and ancient thangkas, 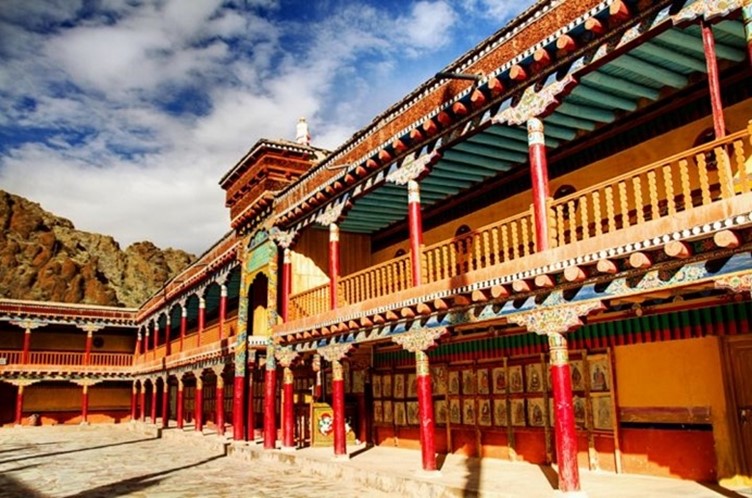 Hemis is the most popular, largest and wealthiest monastery in Ladakh whos history dates back to the 1600’s. It belongs to the Drupka order of Buddhism. It was built during the rule of the King Singge Namgyal and was founded by the first incarnation of Stagsang Raspa Nawang Gyatso in 1630, and initially it was named Changchub Samling, the small Buddhist community was born here.
This monastery is famous for its annual festival known as the Hemis Festival. This festival celebrated to commemorate the birth anniversary of Guru Padmasambhava. It is held on the 9th and 10th day of the 5th month of the Tibetan calendar. The monks put up mask dance performances wearing colorful dresses which are vehement and enchanting. Hemis is praised for spectacular copper statue of Buddha, the beautiful paintings, amazing Thangkas that depicts various aspects of Buddhist culture, Stupas, and articles. Hermis monastery is located 45 km from the southeast of Leh. 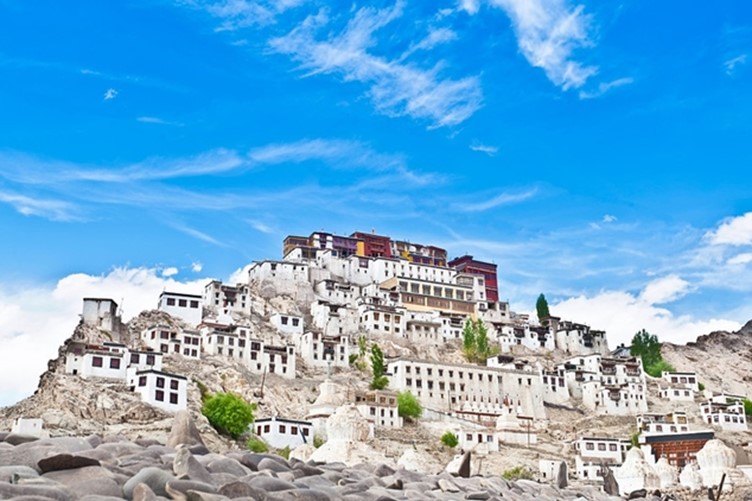 Thiksey is a beautiful monastery in Leh belonging to the Gelukpa order of Buddhism. The aura of the monastery is full of positivity. It is 12 stories monastery and has 10 temples inside. The highlight of this monastery is the 40-foot statue of Maitreya Buddha (future Buddha) seated on a lotus which alone covers almost two floors of the monastery.Thiksey has an exotic collection of Buddhist books and journals, breathtaking statues,beautiful Thangka paintings scripts, stupas, and swords.Thiksey was first built at Stakmo by Sherab Zangpo. Later was found by the nephew of Sherab Zangpo, Paldan Sherab, a on a hilltop to the north of the Indus River in the year 1430 A.D. This monastery is nicknamed ‘Mini Potala’ of India because of its resemblance to Potala Palace in Lhasa, Tibet. The Thiksey Gustor Festival is a festival held during the 10th month of the Tibetan calendar which is during the months of October – November. The sacred mask or Cham dances are performed by resident monks and nuns as a part of a ritual in this festival. Thiksey monastery is located 17-19 kilometres from the south of Leh.

Diskitis a beautiful monastery located in the Nubra valley and belongs to the Gelugpa order of Buddhism. This monastery is very serene due to to the location it is in and attracts people for the positivity and peace it renders.
The highlights if this monastery are its rich interior designs and architecture,
the statue of Cho Rinpoche (Crowned Buddha), and the Morning Prayer ceremony which one cannot afford to miss. The monastery was founded in 14th century by Changzem Tsera Zangpo. In the month of February the tourists can witness the famous Dosmoche festivals hoisted here. The Diskit Monastery lies 150 km from the north of Leh and 15 km north-west off the Khalsar-Panamik route.

This monastery was the first construction by the Tibetan monks as believed by the Buddhist mythology. It is also popularly known as Klu-Kkhyil gompa. The highlight of this monastery are the museum located inside it consisting of wide range of artifacts, Likir Dosmoche Festival which is conducted on the 12th month of Tibetan Calendar and the preachings the of Pratimoksha disciplines.
The name Likir means the Naga encircled. The monastery got its name as it is believed to be guarded by the two serpent spirits, Nanda and Taksako. It is also popularly known as Likir Gompa and was founded by Lama Duwang Chosje in the 14th century. Likir Gompa is about 62 km to the West of the main city of Leh.

The highlights if this monastery are Sum-tsek- three-story temple, the four-armed huge Bodhisattva statue, white Avalokiteshvara statue, an idol of Maitreya Buddha, and the beautiful Jampe Lhakhang Temple. This monastery has beautiful architecture and is very colourful. It consists of ancient paintings, and books. Alchi monastery is Located 70 kilometres from the west of Leh on the banks of the Indus River 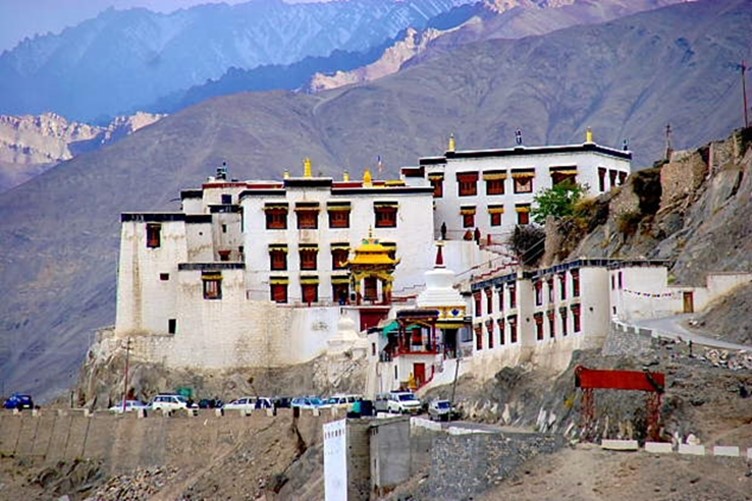 Spituk is a beautiful monastery founded in the 11th century by Od-de and belongs to the Gelupa order of Buddhism. Hundreds of monks live in this monastery. The highlights of this monastery are giant statue of goddess Kali, the icons of Buddha and 5 thangkas, the temple of Goddess Vajrabhairva which is unveiled only once during the Spituk Festival and the Spituk Festival or Gustor Festival held in the 11th month of the Tibetan calendar. During the festival the monks put up masked dances depicting the life of Buddha and stories of evil. Spituk Monastery is located 8- 11 km from the main town of Leh.

This monastery was founded by Mahasiddha Acharya Naropa in the 11th century who came to the place for meditation and it belongs to Red-Hat Sect of Buddhism. The highlights of this monastery are temple of Singhe Ghang, the beautiful views of Lamayuru Village, rich paintings, murals, scriptures and statues of different forms of Buddha and thangkas. Every year in 5th month of the Tibetan Lunar Calendar, a holy mask dance is performed inside the monastery by the monks and is noteworthy.
Lamayuru is located about 125 km from Leh town. 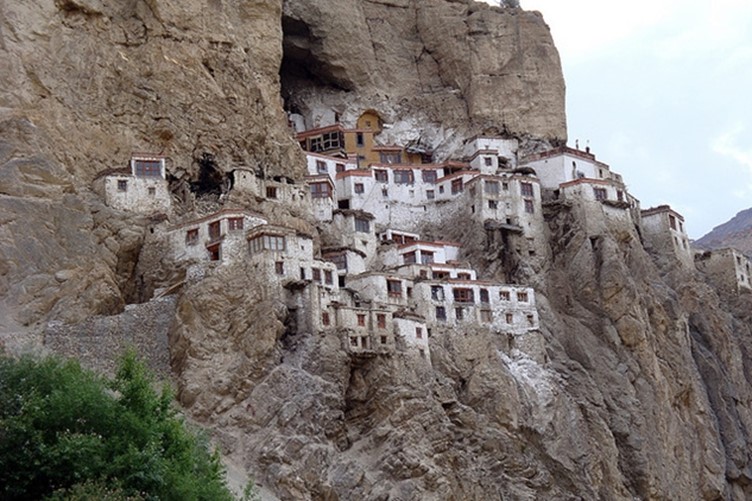 Phugtal monastery is the best monastery in Leh and is known for its calm aura and is a great meditation place. It was founded by Gangsem Sherap Sampo during the early 12th century.It is said that around 2,550 years ago renowned sages, scholars, and translators used to visit this place and it still is a preferred place by the scholars and teachers to meditate. One can only reach this monastery by trekking as it is located on the top of a hill like honeycomb. The region is made up of mud and wood.The highlights of this monastery are the magnificent views of the mountains, breathtaking views of Lugnak Valley, the natural cave, library and the prayer rooms houses. Phugtal monastery is located in Lungnak Valley which is the south of Zanskar and trekking to this monastery can be a surreal experience. 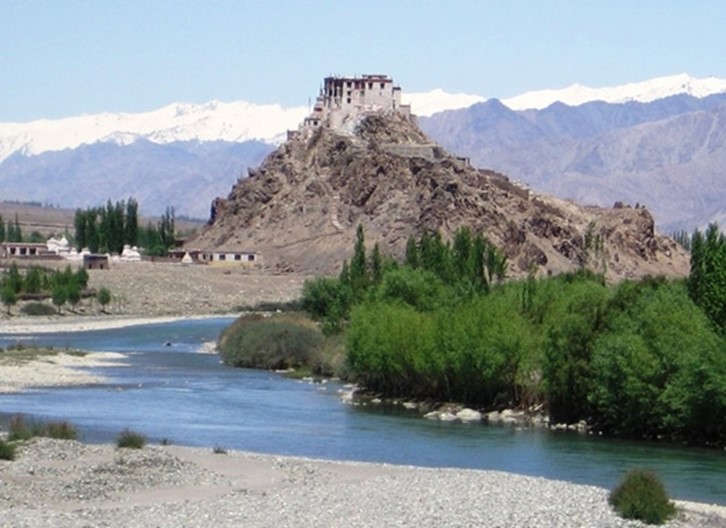 Stakna is a serene and beautiful monastery belonging to the Drugpa sect of Buddhism. It was founded during the reign of King Jamyang Namgyal in 1580. The name Stakna means Tiger’s nose which is also denotes the shape of the hill on which the Stakna monastery is located. The highlights of this monastery are Dukhang Assembly Hall which consists of the paintings of Sakyamuni, Tsephakmad, and Amchi, the statue of Arya Avaloketesvara, paintings of Padma Sambhava, Bodhisattva, and Tshong-san-Gompa, and silver-gilded chorten with Buddha picture. This monastery has numerous Buddhist scriptures, paintings, and idols. The Stakna Monastery is located about 45 km from Leh. 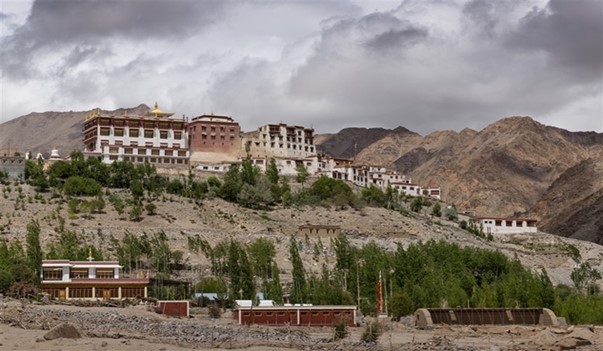 It is the most visited monastery in Leh ad belongs to Dri-Gung-pa sect of Tibetan Buddhism. This monastery has spectacular views of the surroundings as it is located on a hilltop. The name Phyang is said to be derived from Gang Ngonpo that means the blue mountain. The highlights of this monastery are

900-year old museum that depicts thangkas, various idols, scriptures, weaponry and guns of Mongolian, Tibetan and Chinese, Gang-Sngon Tsedup Festival, and Sacred Dance Festival. The Phyang monastery is noteworthy for the Gang-Sngon Tsedup Festival, which happens every year, starting from the 17th day up to the 19th day of the first month of the Tibetan calendar. This festival attracts a large number of tourists every year. The festivals exhibits dance, music, mask dance and the Cham dance by the lamas which is exotic to watch. Phyang monastery is 40 km from the west of Leh.

This is the most famous monastery in Leh and is the only monastery belonging to the Nyingmapa order of Buddhism. It was built during the rule of ‘Tshewang Namgyal’ and gets the name Takthok which in English means ‘rock roof’ because it is built around a cave on a mountainside.
The monastery consists of beautiful rocky walls and roofs, Meditation cave of Padmasambhava , assembly hall, beautiful paintings,statues and murals of Buddha, Dorje and Takposa, central courtyard, beautiful frescos, murals, and the holy throne of Dalai Lama.

The Takthok monastery is located at a distance of about 46 km from Leh. 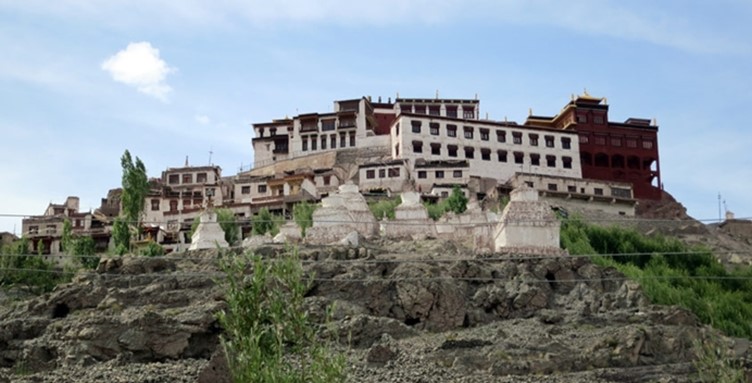 This is a 500-year-old beautiful monastery and belongs to Sakya Sect of Buddhism. It was founded by Lama Dugpa Dorje in the year 1410. The

Nagrang festival is held here on the 14th and 15th day of the Tibetan calendar and is beautiful. There are also other festivals conducted here and there is a strong belief of supernatural power by the Lamas and inhabitants here. This might be the best monastery to visit for people who are interested in stuffs relating to supernatural power. This monastery has a beautiful collection of

Thangas, sacred paintings, statues of Maitreya, Buddha Sakyamuni, and a fierce statue of Avalokitesvara. This monastery is located 20 km from the south of Leh. 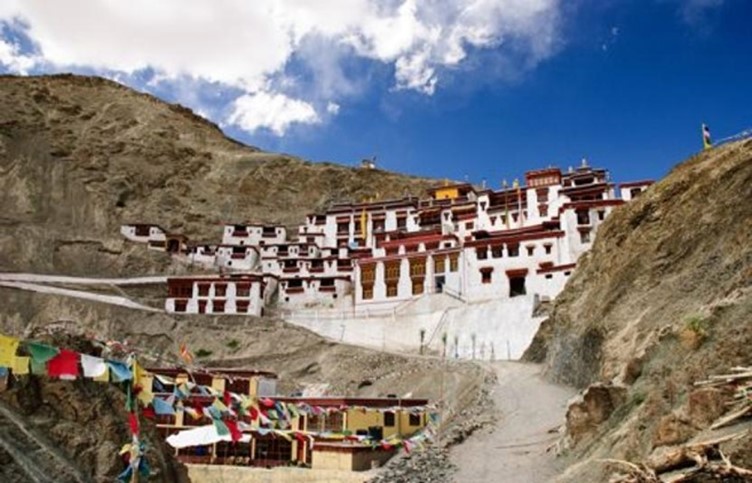 Rizong monastery also known as the paradise for meditation. It was built by Lama Tsultim Nima in the year 1831 and belongs to the Gelugpa Order of Buddhism. This place is popular due to the belief that believed that Guru Padmasambhava along with his disciples meditated in isolation in a cave near Rizong and they survived with only a meal in a day. The monks here follow a very strict and disciplined life and are taught great scriptures.
About 2 km away, from Rizong Monastery is a nunnery, called Chulichan (Chomoling), which is under the control of the monastery. There are 20 nuns and they worship at the temples of the monastery, perform chores like milking, spinning wool and getting oil for the temple lamps The Rizong Monastery is located 73 km from Leh

It is one of the oldest monastery and was founded by Lotsawa Rinchen Zangpo.This monastery’s construction consists of three temples and a huge assembly hall. The temple of Sumda Chun is listed as one of the 100 most endangered sites in World Monument Funds 2006 Watch ListThe highlights of this monastery are Image of four headed Vairocana and murals of Akshobhya ,Ratnasambhava,Amitabha and AmoghasiddhiSumda Chun is 65 km away from Leh 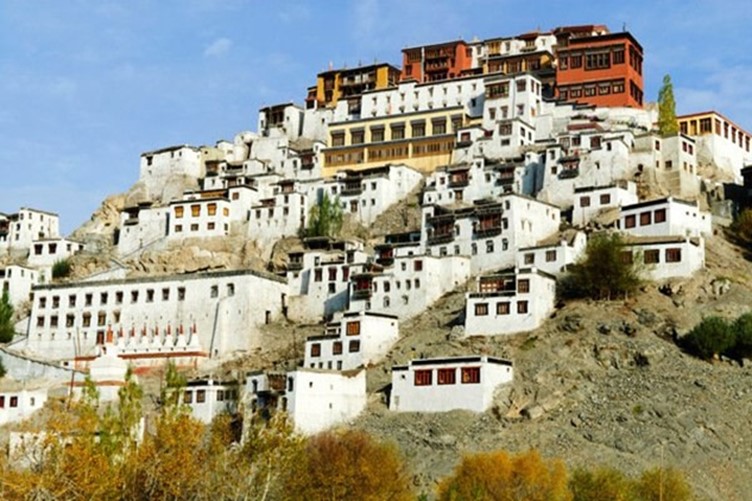 Shey was built in 1655 by Deldon Namgyal, the king of Ladakh.The highlights of this monastery are the large Buddha statue made of gold, beautiful paintings and murals, Rancho School which is Druk Padma Karpo Institute renamed after the movie three idiots, five Buddhas carved out of rock, and the views of the Hemis and Thiksey monastery. This monastery stresses on the importance of integrity and spirituality to the tourists. The Shey monastery is situated 16 km from the Leh

Visiting the monasteries in Leh can be a surreal experience as they not only exhibit their cultural and religious values but also is a place of divine aura and one can quench their soul with calmness and peace in these monasteries.