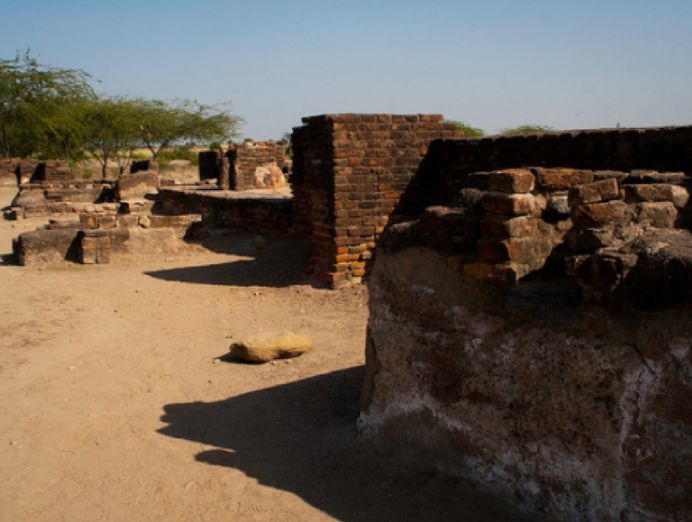 Lothal, which means “the mound of the dead”, is an old city dating back to the 4,400-year-old Harappan civilization located in the Bhal region. Discovered in 1954, Lothal was excavated from 1955 to 1960 by the Archaeological Survey of India. According to their findings, Lothal had the worlds earliest known dock. Lothal was a vital and thriving trade centre in ancient times, with its trade of beads, gems and valuable ornaments reaching its hands till Africa and West Asia. Archaeologists had enough evidence to conclude that the Lothal experts had achieved something 2000 years before Greeks: an 8-12 fold division of horizon and sky, as well as an instrument for measuring angles and for navigation. 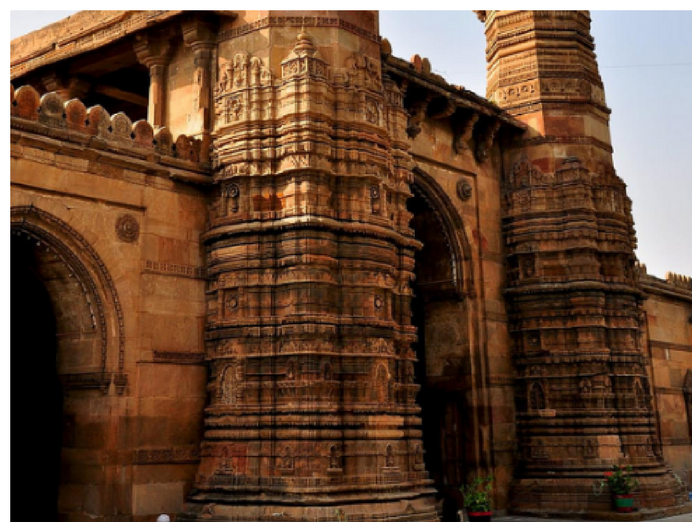 Also known as the Shaking Minarets, the two pillars have a playful and quivering mystery. It has left the best of architects and pioneering design engineers intrigued and in an unresolvable wonder. What they cannot unravel is when one minaret is shaken the other begins to vibrate, though the passage between them is vibration free. What causes the vibration is unknown. There are two well-known pairs of minarets in Ahmedabad, one located opposite to Sarangpur Darwaja and other in the Kalupur Railway Station area. 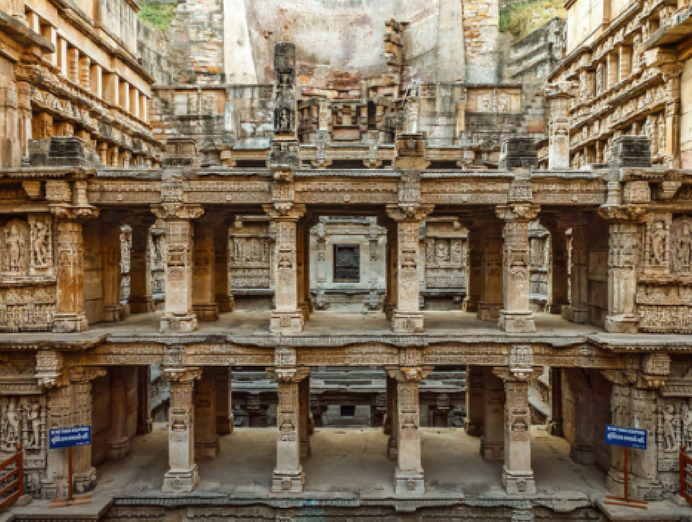 Rani Ki Vav is an inticately constructed stepwell situated in the town of Patan. Rani Udayamati commissioned this stepwell in 1063 in the memory of her husband King Bhimdev l of the Solanki Dynasty. The seven story stepwell is actually made like an inverted temple. Three over the ground and four below. The well measures approximately 65 meters long, 20 meters wide and 27 meters deep. The delicate and intricate work on the walls, columns and roofs are simply outstanding. It was added to the list of UNESCO’s World Heritage Sites on 22nd June 2014. It also earned the title of ‘Cleanest Iconic Place’ in India at the Indian Sanitation Conference on October 2016. 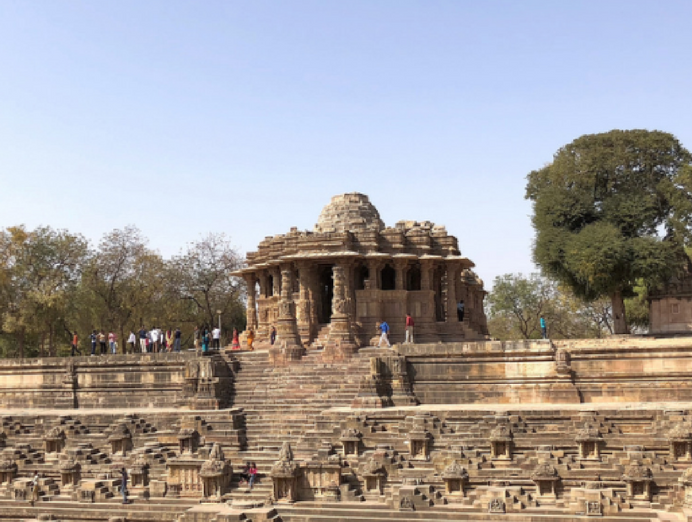 The Sun Temple is a Hindu temple dedicated to the solar deity Surya located in Modhera village of Mehsana district. The temple is one of the most important and famous historical places in India. It was built during 1026-27 CE under the reign of Bhima l of the Chaulukya Dynasty. The temple is an excellent example of the Maru-Gurjara style of architecture. It is comprised of 3 components: Gudhamandapa, the shrine hall; sabhamandapa, the assembly hall and kunda, the reservoir. The halls have intricately carved exterior and pillars. 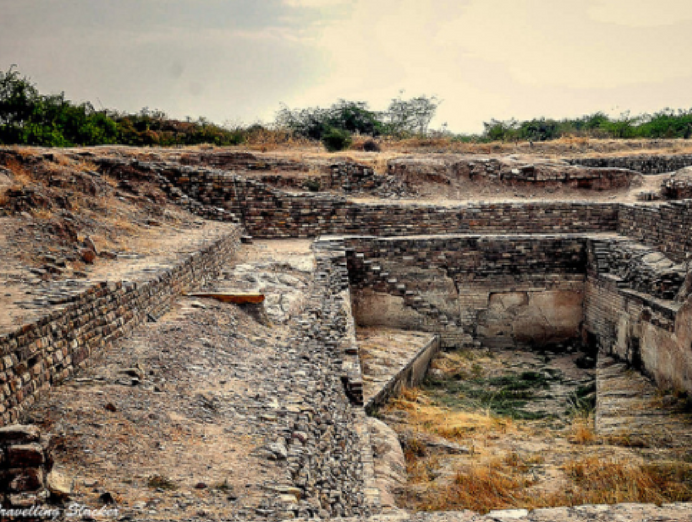 Also locally known as Kotada Timba, Dholavira is an ancient metropolitan city in Gujarat situated in Bhachau Taluka of Kutch District. Dating back to 2650 BCE, the site contains ruins of an ancient Indus Valley Civilization/ Harappan city. It is one of the five largest Harappan sites and most prominant archeological sites in India. The Archaeological Survey of India discovered it in 1967-68 and the excavation was initiated in 1989. Dholavira is known for its sophisticated urban planning and architecture. “The kind of efficient system of Harappans of Dholavira, developed for conservation, harvesting and storage of water speaks eloquently about their advanced hydraulic engineering, given the state of technology in the third millennium BCE” says R.S. Bist, Joint Director General of Archaeological Survey of India. 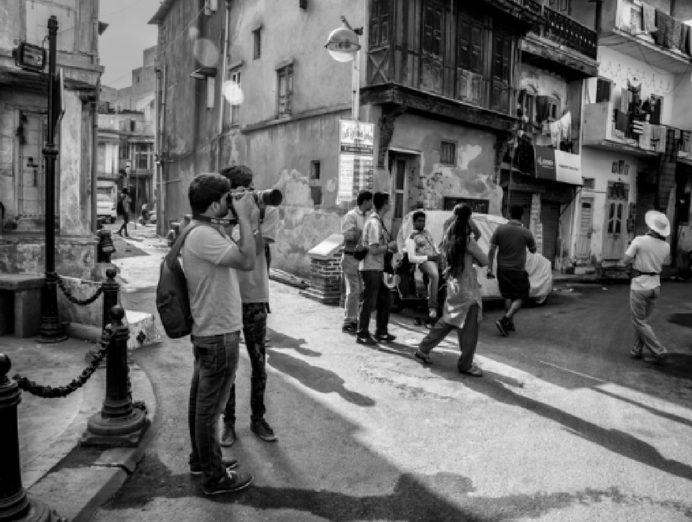 This July, Old Ahmedabad became the first Indian city to be recognized as a UNESCO World Heritage City. It was found by Ahmad Shah l of Gujarat Sultanate in 1411. The old city has some of the finest Indian-Islamic monuments and exquisite Hindu and Jain temples. With the purpose of unveiling the cities story to the tourists, the Amdawad Municipal Corporation launched The Heritage Walk of Ahmedabad in association with CRUTA foundation. The walk commences from the early 19th century Swaminarayan temple in Kalupur, encompasses 20 main spots besides numerous areas and aspects of the old city and concludes at the famous 15th century Jama Masjid. Hence the Walk is popularly known as the journey of ‘Mandir to Masjid’. 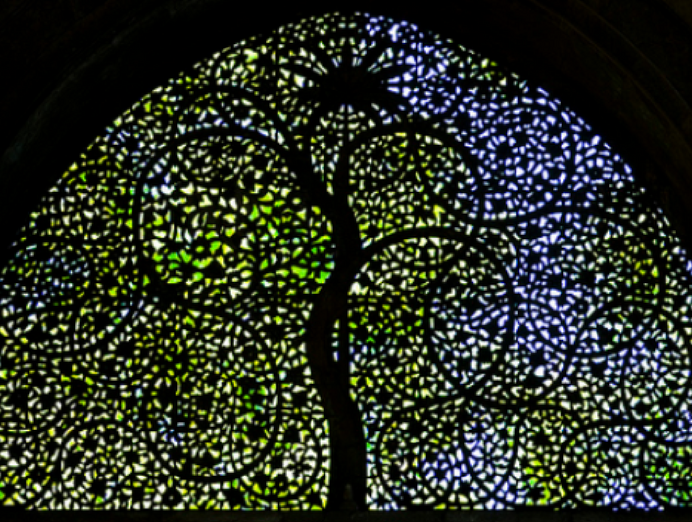 The Sidi Saiyad Mosque, built in 1572 AD, is one of the most famous mosques of Ahmedabad. The Sidi Saiyad was commissioned by the last Gujarat Sultanate. The mosque is entirely arcuate and is famous for beautifully carved jalis on the side and rear arch. The ‘Tree of Life’ jails on this mosque has become an evident symbol of the cities heritage. The rear wall is covered with square stone pierced panels in geometrical designs. 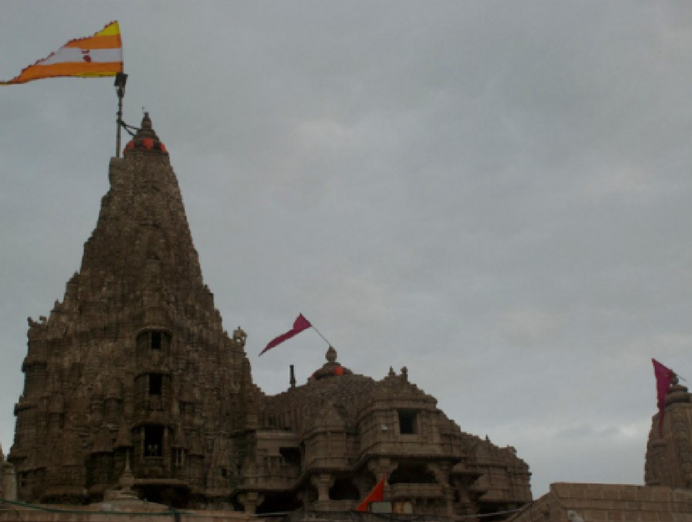 Often known as Jagat Mandir or Trilok Sundar, Dwarkadhish Temple is a Hindu temple dedicated to Lord Krishna and is situated in Dwarka. Archaeological findings suggest it to be 2200-2000 years old. Originally believed to be built by Vajranabh, the grandson of Lord Krishna, it is a glorious structure seeming to rise from the waters of the Arabian sea. The temple is 43 meters high and the flag made from 52 yards of cloth resting on the exquisitely carved shikhar can be seen from as far as 10 kms. The temple is built of soft limestone. The carvings on its exterior multi-layered mythic intensity, daring eroticism and extraordinary continuity of design. 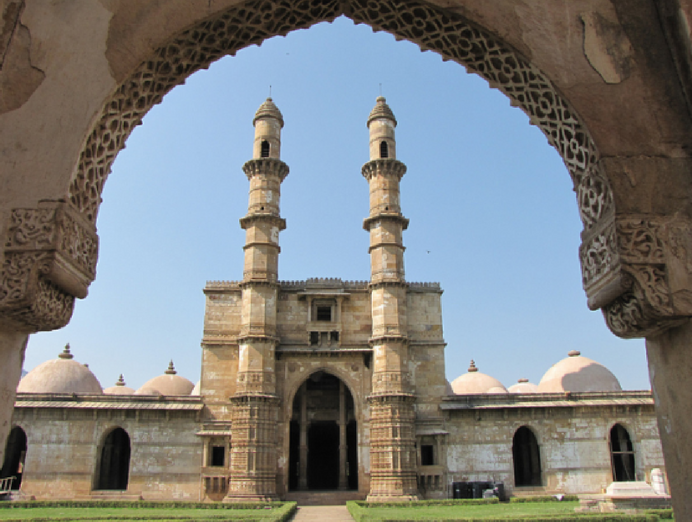 Champaner-Pavagadh Archaeological Park is located in Panchmahal district in Gujarat. The heritage site is studded with forts with bastions starting from the hills of Pavagadh and extending into the city of Champaner. It comprises of an ancient citadel, a palace, plenty of military structure and buildings and water installations. The transition between Hindu and Muslim culture and architecture in the late 15th to early 16th century is well documented in this park. It has well-preserved mementoes from each successive change in empires and dynasties. The archaeological park is also the only complete and unchanged Islamic pre-Mughal city in India. It was inscribed by UNESCO as a World Heritage Site in 2004. 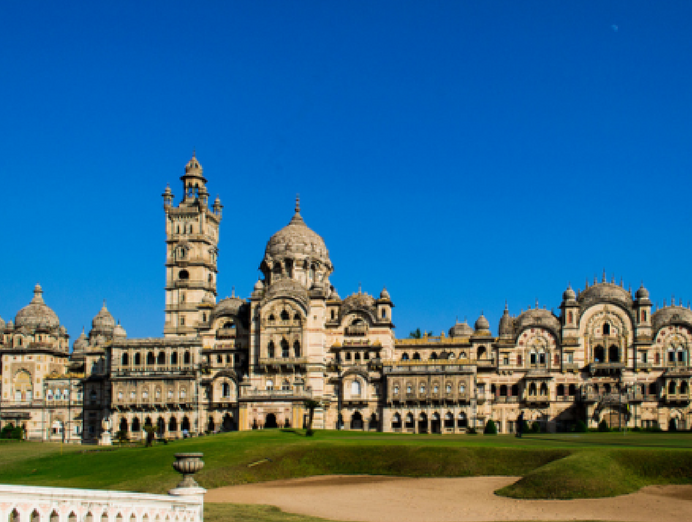 Laxmi Vilas Palace, an extravagant building of the Indo-Saracenic Revival architecture, was built by Maharaja Sayajirao Gaekwad lll in 1890. The palace is situated in Vadodara and it remains the residence of the Royal Family. It is reputed to have been the largest private dwelling built till date, sizing about four times the area of Buckingham Palace! The palace houses a remarkable collection of old armoury and sculptures in bronze, marble & terracotta by Fellici. The grounds were landscaped by William Goldring, a specialist from Kew gardens. And if all that is not enough to prove its royalty, the palace also boasted a small zoo! The only remnant of the zoo is the pond where a number of crocodiles remain.

18 AMAZING THINGS TO DO IN AHMEDABAD

16 PERFECT WEEKEND GETAWAYS FROM AHMEDABAD FOR A FUN FILLED WEEKEND

11 OF THE PERFECT 2 DAYS TRIPS FROM AHMEDABAD

ALL ABOUT AHMEDABAD IN WEEKEND