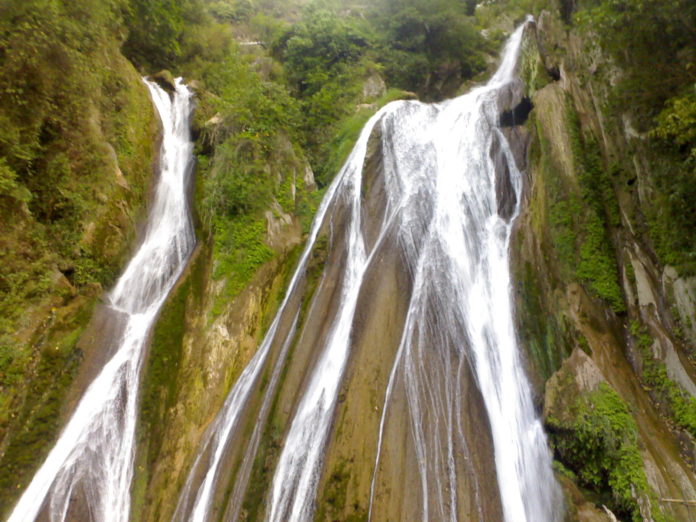 Branded as the ‘Queen of Hills’, Mussoorie is nestled in the bosom of the Garhwal Himalayan ranges, 300 km from the National capital. The town is named after ‘mansoor’, a local shrub that is ethnic to this area. In contrast to the conventional holiday-hill stations, Mussoorie is greener and the temperature is more pleasant, making it a sought after weekend getaway destination.

Things to do in Mussoorie

Mussoorie is an expansive tourist destination which has a lot to do. So head to Mussoorie over a weekend to escape all the stress and leave your worries as you take in the rich oxygen with a lot of exciting things to do at this weekend destination.

By far the most popular tourist spot in Mussoorie is to visit the Kempty Falls. A magnificent sight to look at, with the water gushing from great heights having a milky appearance as it hits the rock bottom, was actually developed by a British officer. A picturesque spot, rewind here for some time with your family, may be relax your nerves in the cool waters that take every ounce of stress from your body. With this, your weekend getaway is sure to start on a high note. 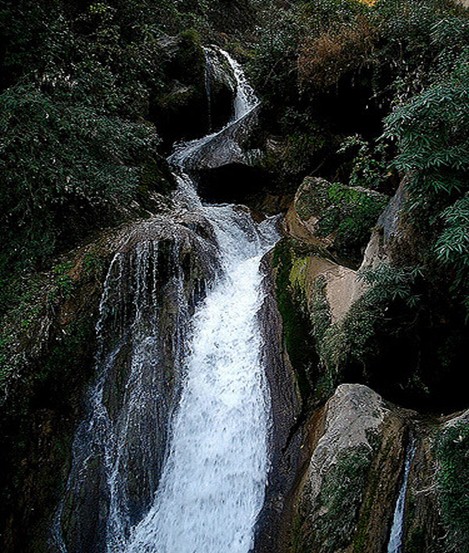 Wake up an early, chilly morning and take a 7 km hike from the Library road to witness a breath-taking view of the clouds playing peek-a-boo between the fog and the high mountains at the clouds end. The area is marked by the lush territory of Oaks and Deodars, the landscape is absolutely spectacular and worth waking up early in the morning on your holiday; do not miss out on the highlight of you weekend getaway! 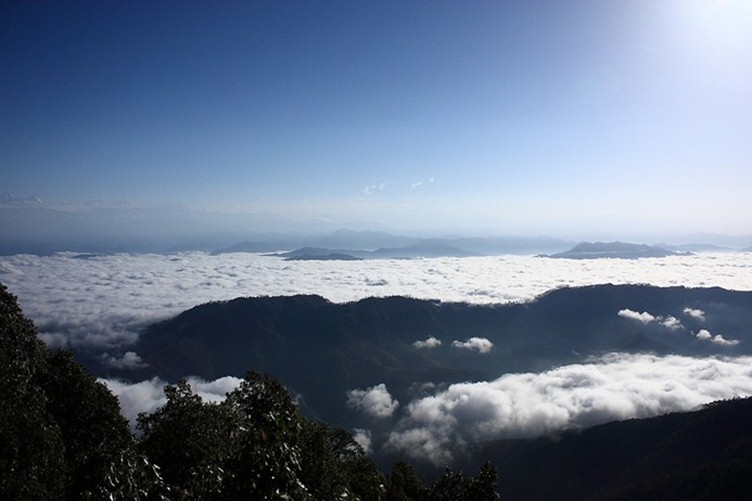 Every hill station is famous for one ‘mall road’ that it has; a slightly steep road lined by eateries and shops selling local food and local artefacts. If you want to observe the culture and practices, you should visit the mall road with a keen and open eye for detail. The mall road at Mussoorie has colonial style street furniture and architecture, from lamp posts, to little houses. Take a walk in the evening to have a local bite or just chai! 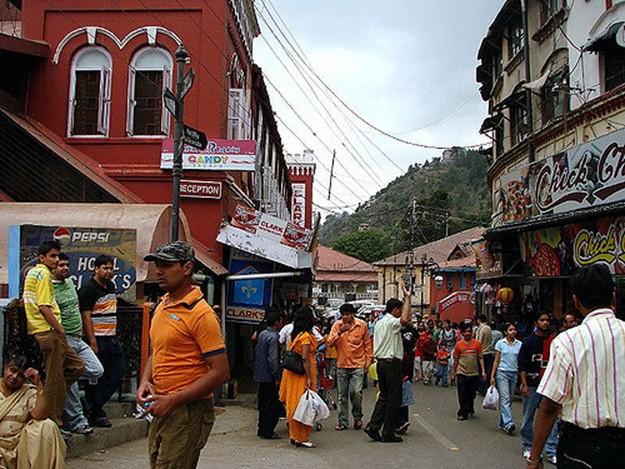 One of the most reputed surveyors of the British era was Sir George Everest who set up his observatory and laboratory in Mussoorie and surveyed the surroundings. Located about 6 km from the Mall Road, you have to hike up the mountain to reach the laboratory or the minaret from where the whole scenery of the Doon Valley can be seen. You cannot enter the house though, but the lush meadows make for a great spot to rewind. 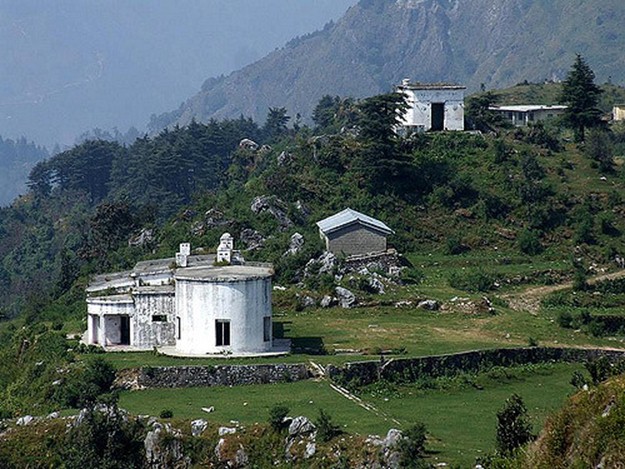 Another popular name in the list of natural water falls in Mussoorie, the Jharipani Falls are located a little ahead of the main city, about 9 km. The Shivalik ranges in the backdrop of the surging waterfalls that are a mighty view to watch. Go picnicking here with the family on a bright afternoon for some quality time. 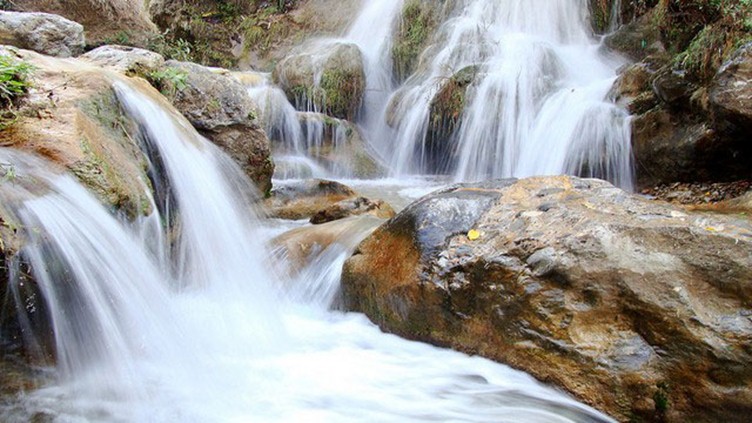 Calling out for the adrenaline seeking adventure junkies is paragliding in Mussoorie. Paragliding is on the bucket list of every traveller and what better place to do it than in Mussoorie! With well trained professionals and instructors, your experience is going to be sure shot fantastic. On the plus, the activity is completely budgetary at this marvellous weekend destination. So let the winds do the talking. 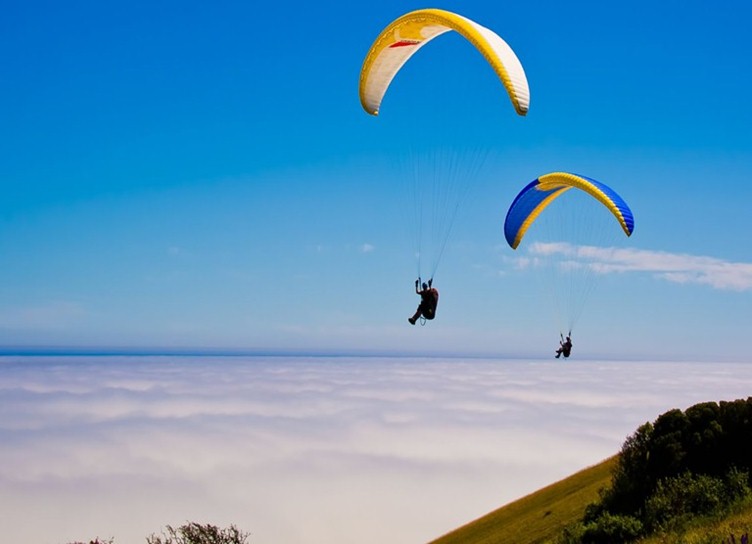 Also called Ropeway, this is one of the major highlights of the tourists who visit Mussoorie as a weekend destination. Gun hill comes second on the list of highest peaks in Mussoorie after Lal Tibba. One can reach Gun hill by the means of the Ropeway, which operates to an elevation of 2024 feet from the ground. The experience is fun-filled, especially for the kids. The view from top is enchanting as it outlooks the other Himalayan ranges. 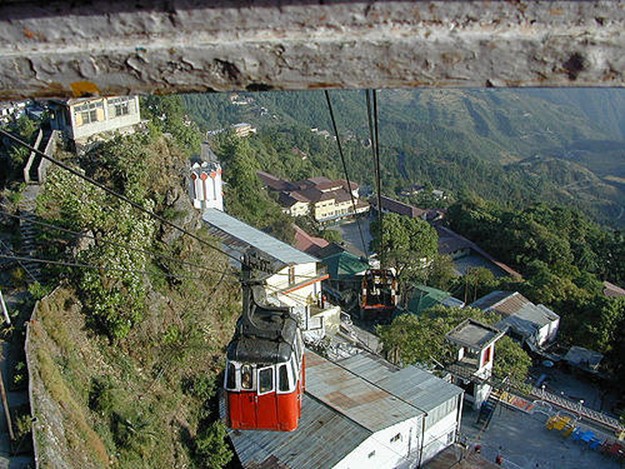 Mussoorie is steadily becoming a mini hub for adventure activities and is bustling with such activity providers. One such addition is sky ride. The high mountains make Mussoorie the best spot for sky riding, thank to exceptional heights that create thrill like no other weekend destination. The kick of reaching from one end of the mountain to the other via a zip line at an enthralling speed of 90 km/hour at a whopping height of 800 metres is insurmountable. 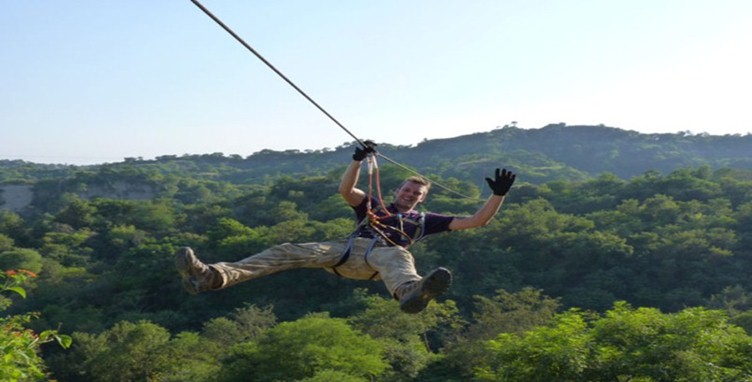 The highest mountain peak of Mussoorie, Lal Tibba is another morning trek-worthy place in Mussoorie. Resting at a spectacular height of 2,346 metres, Lal Tibba looks out to the Bandarpuch (Tail of Hanuman) ranges of the Himalayan Garhwal hills. Witnessing the Sun rise from behind the majestic lush mountains as the whole sky is filled with red hues is a nerve-relaxing experience and one that you shouldn’t miss out on. 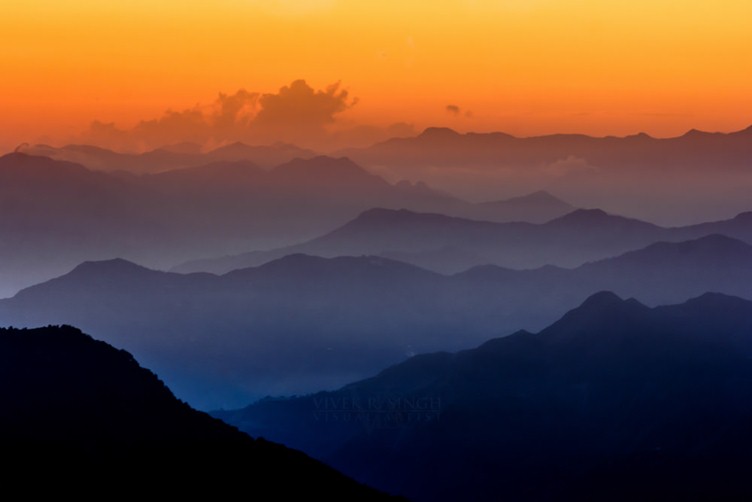 Popularly known as the Jwala ji Temple, Jwala Devi Temple is devoted to Goddess Durga or Kali Maa. Every year, lakhs of Durga Maa devotees visit this temple, built on a hill on an astonishing height of a 2100 metres. From the temple, you can see the Yamuna River flowing by and Shivalik hills in the backdrop. Visit this place to complete you weekend getaway by seeking Maa Durga’s blessings. 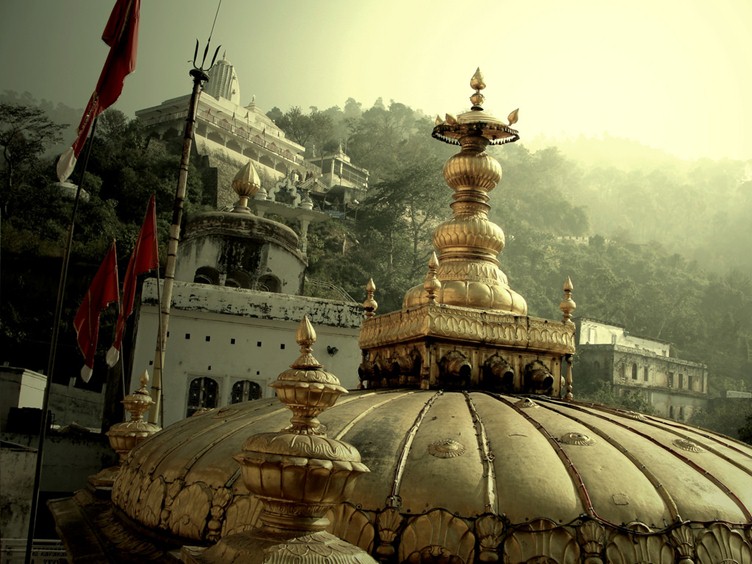 A part of the Rajaji National Park, The Benog Wildlife Sanctuary is located 10 km away from main Mussoorie city. House of birds like the White capped water Redstart and Red billed Blue Magpie, Himalayan goats, panthers, leopards and bears, wear your trekking shoes to go spotting these endangered fauna, right here in Mussoorie. Located after a few minutes’ drive from the Jwala Devi Temple, you can also spot the Chaukhamba and Bandarpunch peaks from here. 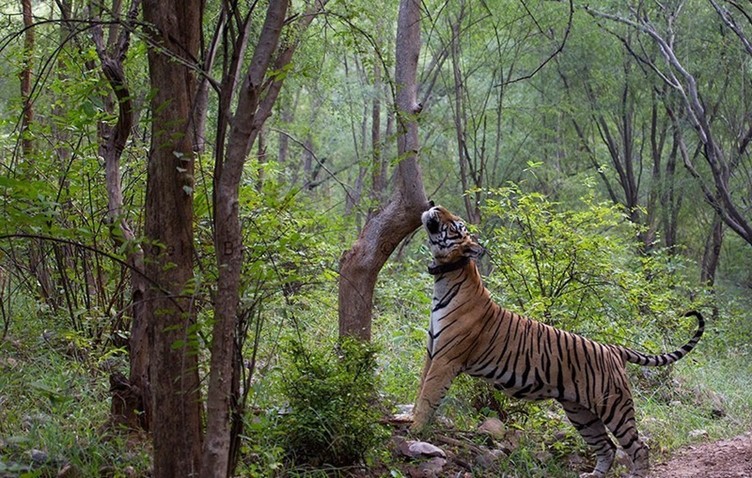 The weather in Mussoorie and it’s absolutely magical with the evenings being the highlight with pleasant winds. With the weather being a little above zero degrees, people like to stay in around the bonfires. However, the highlight of Mussoorie is skating. ‘The Rink’ is a skating rink in Mussoorie, built as a part of the evergreen and regal hotel, ‘The Pavilion’. Another hotel, the ‘Jaypee Residency Manor’ has an open skating rink where you can skate on hourly basis. The activity is a high point for all the children. 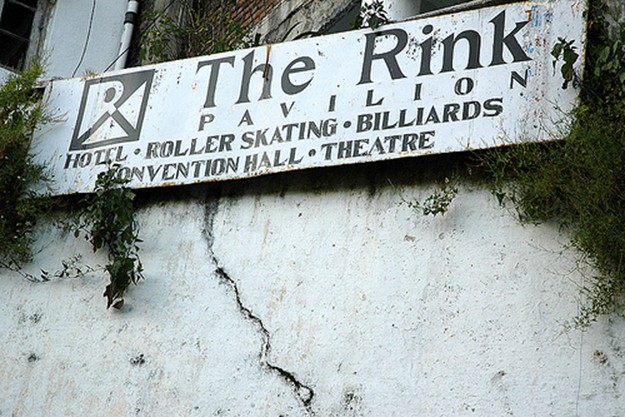 If you are the one who loves nature trails and exploring the rich flora and fauna of a region, and like to trek with your shoes on, then Hathipaon is THE place for you. As you walk through thick woods to reach Hathipaon with the birds chirping along the way, you will not realise how fast you will cover the 6 km distance! A perfect camping spot for the perfect weekend getaway, a few kilometres into the woods, Hathipaon has the Everest Camping House.

Rappelling is a thrilling activity that sets your adrenaline pumping as you set to cross the river, or waterfall or just a deep ditch via a rope. Mussoorie has started adventure activities very recently and rappelling has been a favourite among the people coming here, thanks to the splendid mountain ranges in abundance here that are intact and devoid of acute human intervention. 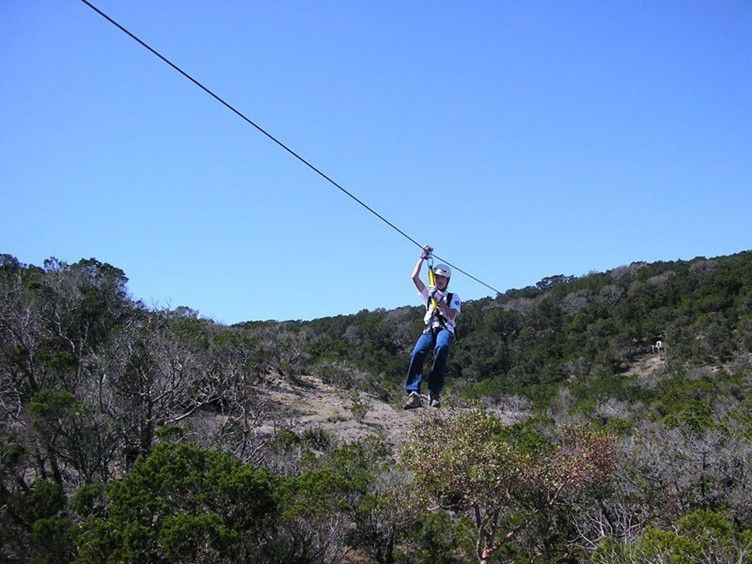 Shopping in Mussoorie can be a delight if you know the right places. The bazaars on Library Road, Sisters Bazaar have traditional warm Jamawar shawls that you can take back for gifting purposes. Especially the Kulri bazaar, where you can buy woollen shawls, brass figurines and statues, carved wooden boxes and other trinkets. The Tibetan bazaar on the Mall Road is also a great place to shop Tibetan prayer wheels and Tibetan apparel. 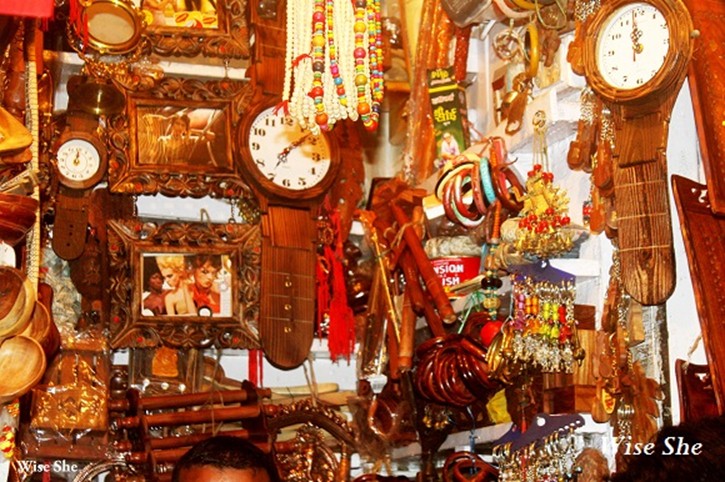